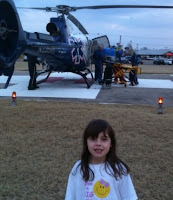 When a child is critically ill, we often rush to help raise funds for their family’s immediate needs: travel, living expenses, medical bills, and all of the things that add up so quickly and take attention away from where we feel it should be directed. Our hearts go out to the family, and more specifically we try our best to support the parents in their tireless journey advocating for their child and being at their bedside. 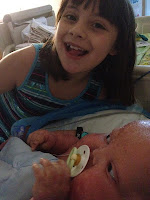 But sometimes someone slips through the cracks… like the siblings of those who are hospitalized, the children who have to sacrifice their time and attention for the family’s greater good, and often do so without complaint or concern for themselves. Recently, we shared with you the story of Liam Lyon, who fought a difficult 18 month struggle and tragically passed away. Liam has an older sister, Cheyanne, who spent six years as an only child and then was suddenly thrust into the world of being not only a big sister, but a big sister to a brother with very special and imminent needs. Cheyanne journeyed with her family to several hospitals across the country and spent countless hours in hospital waiting rooms and by Liam’s bedside, patiently becoming one of Liam’s biggest fans and one of the few people that could bring a smile to his face without hesitation. A year and a half of Cheyanne’s childhood have been surrounded in first sickness and then loss, and now she must bear the sorrow of losing a brother she never had the privilege of experiencing fully. She is surrounded in love, most especially by her two parents, as she journeys through paths so few children have to take. 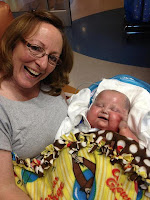 Cheyanne and Liam were blessed not only with a loving mother and father, but an exceptionally supportive and nurturing grandmother, Nanci. Nanci dropped everything in her own life to be there for her daughter, Whitney, through Liam’s extensive struggles. Whether it was traveling hundreds of miles from one hospital to the next or helping with family obligations, Nanci did whatever she could to ease the unimaginable burden her daughter faced. As time wore on and Liam became more ill, Nanci felt that she had to be there constantly for her family in their struggles. After having cut back to part-time work, she realized her full-time attention had to be on Liam. She quit her job, cashed in her retirement, sold her home, and even ended a relationship in order to be with her number one priorities: her child and grandchildren. Nanci saw it all and was there for some of the most heartbreaking and emotionally tumultuous times the family has ever seen, but she doesn’t regret her decision. In the end, she was able to be there for people who needed her, and able to spend valuable time with her precious grandson. 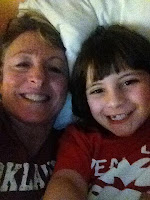 We are always faced with stories of exceptional people but it still never fails to impress us when we see such an amazing family whose members put one another first in their time of need. So now we would like to give back to them, and we need your help!

For going above and beyond in the name of love, we would like to host a benefit auction to send Liam’s mother and father, Cheyanne and Grandma Nanci to Disney World in Florida. All profits from this auction will be used to pay for airfare, hotel, park tickets and food. Any amount raised beyond this point will be donated directly to Liam’s family for them to use as they see fit. If we are unable to raise enough funds through an auction, we will host a DOTD special. We will also be accepting donations in any amount through PayPal at this address: cathyscreationsjewelry@yahoo.com. As always, if you send money through PayPal, please be sure to mark it as a "gift" so the amount is not garnished.

We are also accepting donations to feature in our auction. For more information, please email Cathy: cathy@cathyscreationsjewelry.com 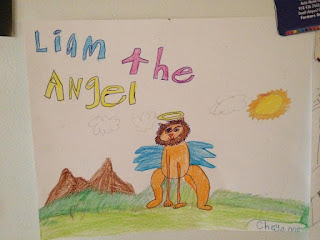 Drawing of Liam Lyon by his sister Cheyanne after he passed away
Posted by Sofia's Angels Foundation at 10:10 AM 33 comments: