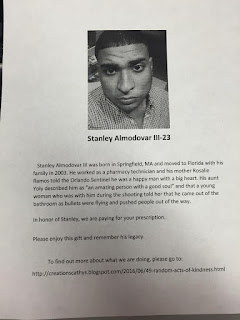 Stanley, a pharmacy technician, was known for his interesting hair colors and his winning personality. His family describes him as a caring person with a promising future who worked hard to achieve his success in life. A witness at the nightclub stated that Stanley attempted to push people out of the way of the gunfire, even as he himself was being shot.

In honor of Stanley, we have connected with a pharmacy in a low-income area and have paid for the prescription of a person who could use a helping hand.

"We rise by lifting others" - Robert Ingersoll

To find out what we are doing and why, click here.
Posted by Sofia's Angels Foundation at 7:08 PM